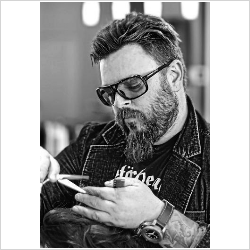 2016-06-01 - June 2016 - Michael Levine (Digital Download) Michael Levine is one of Canada’s most sought-after hairstylists. A hairdresser since 1994, he was recruited by Aveda in 1996 to lead their cutting and coloring education in western Canada. Now with three salons, two academies, a product company, and several NAHA nominations and Contessa Awards on his résumé, he has become a popular writer, speaker, and blogger. Interviewed by Winn Claybaugh, Michael delivers a wealth of valuable input, from promoting yourself and the importance of being nice to creating a loyal team and being obsessed to achieve success.